Aneri Pattani, a recent graduate of Northeastern University, is the winner of Nicholas Kristof’s annual win-a-trip contest. She traveled with the New York Times reporter to Liberia.

When Nick Kristof announced back in February that I had won his Win-A-Trip contest, the first thing most of my friends said to me was congratulations, almost immediately followed by requests for the inside take on how a Times columnist gathers material.

I didn’t end up getting them autographs (I tried to keep things classy on the trip), but I did come away with some insights on how to be a better journalist in the field. I hope that’ll be good enough! Here are my top five takeaways:

1. Just ask. Anyone. Anything.

On one of our trips to a rural village, we encountered a truck stuck in the road, blocking our route. As Nick and I got out of the car and started walking to the nearest village, people began gathering along the road. I smiled at them, but didn’t think to do much more. Nick, on the other hand, turned it into an impromptu interview.

Within minutes we were discussing Liberian marriage customs and bride prices (payment given by a groom to the bride’s family). With a little encouragement from Nick, I even asked one of the men what he would look for in a future bride.

It was intimidating at first to drop into a foreign country and a foreign culture and start probing people with questions about their health, education, beliefs and more. But I learned that I should never be too shy to ask a question, as long as I do it respectfully. Assume people want to tell their story, and they usually will.

As it turns out, the guy I asked said he wasn’t picky. As long as he could afford the bride price, most girls would do.

It’s not that I thought traveling through West Africa would be glamorous, exactly. But I think there is a concept among young journalists that foreign reporting involves hopping from one exotic location to another.

I quickly learned that there is no hopping. Instead, there were hourslong car rides on pothole-ridden dirt roads, often worrying we’d get stranded in a particularly muddy stretch.

There were bathroom breaks in the bushes along the side of the road, putting me at a disadvantage as a woman. If I couldn’t find a bush thick or tall enough for cover, I just had to wait.

There were no lunches. Just protein bars and trail mix on the road.

There were hotel rooms that consisted of a mattress thrown on a cement floor. I was reminded to tuck the mosquito net tightly under the mattress to prevent rats from crawling in with me in the middle of the night. (I can’t say I slept too much that night.)

It’s not glamorous. But important stories aren’t always in glamorous places. In fact, they often aren’t. So it’s important to focus on the stories you want to tell and not expect much when it comes to everything else. 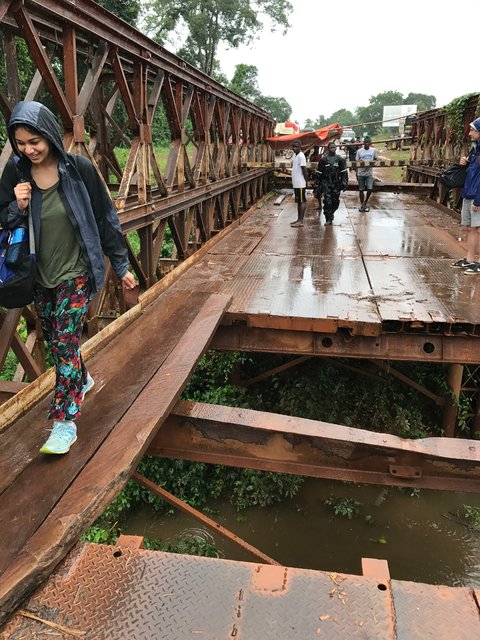 Nick Instagrammed this photo of me crossing a bridge that had partially collapsed, making it impassable for vehicles. It’s a great picture and one that really shows the road conditions during rainy season in Liberia. But it’s not one I would have thought to take myself.

When I was crossing those planks, my only thoughts were “Don’t fall. Don’t fall.” But Nick, who had walked ahead of me, saw a photo opportunity. Unfortunately, I crossed too quickly for him to snap a good picture. So I had to go back and redo it – for the insta!

The planks were stable enough, so it wasn’t as risky as I initially thought, but that moment really emphasized for me the importance of getting visuals (and hopefully getting them the first time). They can make all the difference in telling stories about far off places that are easy for us as Americans to push out of our minds.

4. The right time for questions is in the car, at dinner and anywhere else you can imagine.

Driving around the country meant we spent countless hours in the car. I’m used to napping on car rides, listening to the radio and maybe gazing out the window. I quickly learned that’s not how journalists do it.

If you’re trapped in a car for hours with aid workers, experts or any other sources who are escorting you around Liberia, you should use that time to grill them. It’s genius, actually. You can ask any questions you want and the sources can’t escape – a journalist’s dream!

I learned that you should never waste a moment when you could be asking questions. It’s a lesson I learned to put into action by the end of the trip, when one night, I asked our guest so many questions that 20 minutes into dinner, she hadn’t gotten a chance to look at the menu. I’ll admit, I was a little proud.

5. Know how to prove you’re not public a health risk.

When I got back from Liberia, one of the first stories I told friends and family was about a wood carver I met at a leprosy hospital in Liberia. He has lost all his fingers, but he does amazing work, I told them. I was met with looks of horror. In shock and revulsion, many asked: You visited a leprosy hospital? They thought I was a disease carrier.

I didn’t think to preface that story with an explanation of how leprosy is not highly contagious and that in any case, most of the patients we saw weren’t active carriers of the disease​. I quickly learned that I should have.

Reporting on global public health issues can put you at risk for certain diseases. But many times, the perception of that risk from people at home is higher than the actual risk. In those cases, it’s important to be able to explain to people the basics of the disease and clear up any misconceptions. In a way, that’s journalism too, just on a more personal level.

I went into this trip hoping and expecting to learn a lot. I imagined the lessons would be glamorous – how to get people to reveal their most personal stories or how to write about foreign health issues in a way that would bring people to tears.

While I did walk away with some understanding of those concepts, many of those are skills that are built over time. A lot more of what I learned came from the day-to-day pragmatics of reporting in the field. That’s what I will take forward with me, and that’s the best advice I can give to prepare other young journalists like me who are hoping to try their hand at global reporting.