COMMENTARY vs. JOURNALISM: Are journalists biased?

A recent poll by Gallup reports that 62 percent of Americans believe journalists are biased in the arena of politics. The majority of those polled feel journalists favor Democrats in their reporting.

This isn’t a shocker. Poll after poll has similar results: Americans believe journalists are biased and weave a web of fabricated tales.

Where did we go wrong? 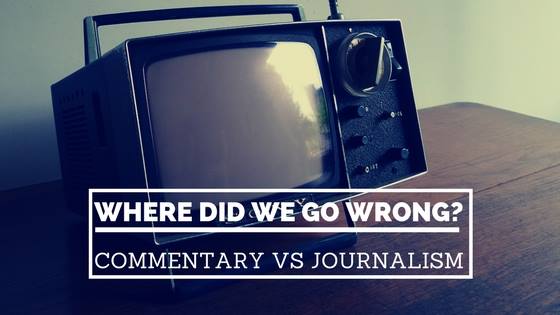 Recently, I engaged in conversations with several individuals who remember Watergate. All expressed that the majority of the Americans they knew didn’t feel the events surrounding Watergate were “fake news” and the “liberal media” was out to destroy President Richard Nixon.

Fast-forward to 2017 and the question I posed earlier: Where did we go wrong?

I walked away from these discussions with a common answer. With an abundance of news sources running 24/7, to fill time, commentators are included in the lineup. The lines between commentary and news have become blurred.

Former politicians, lawyers and other professionals are sitting in the chair formerly reserved for unbiased journalists.

They are providing political commentary in the same manner former pro football players analyze and provide insight during nationally televised games. It’s safe to say that news outlets like CNN, MSNBC, FOX, etc. are pulling an ESPN by bringing in the color commentators. Unfortunately, the general public sees them as biased journalists instead of the commentators they are.

How do we, as educators, raise a new generation of Americans who can tell the difference between commentary and news? I think the answer is as simple as taking the time to explain the difference between the two, then watch and read examples of both. Afterward, have a class discussion or a quick written assignment that gives students the opportunity to share what they have learned in the process.

Just like the instructions on a shampoo bottle tell us we may have to repeat the process, the same applies to this. Teachers covering a variety of subjects from history to journalism can implement this topic into their curriculum to help students know the difference between an unbiased journalist and commentary.

There are several resources that can help guide educators through this process:

The Difference Between Reporting and Commentary: https://collegian.com/2013/02/the-difference-between-reporting-and-commentary/
Opinion Journalism vs Objective News Reporting: http://www.mediacompolicy.org/2013/08/15/opinion-journalism-vs-objective-news-reporting/
Quora: What is the difference between a Journalist and a Commentator: https://www.quora.com/What-is-the-difference-between-a-journalist-and-a-commentator
Some Journalists Blur the Lines Between News and Opinion: http://www.toledoblade.com/MarilouJohanek/2013/10/19/Some-journalists-blur-the-line-between-news-opinion.html